The best way to protect commercial fruit, vines and vegetable crops from frost. 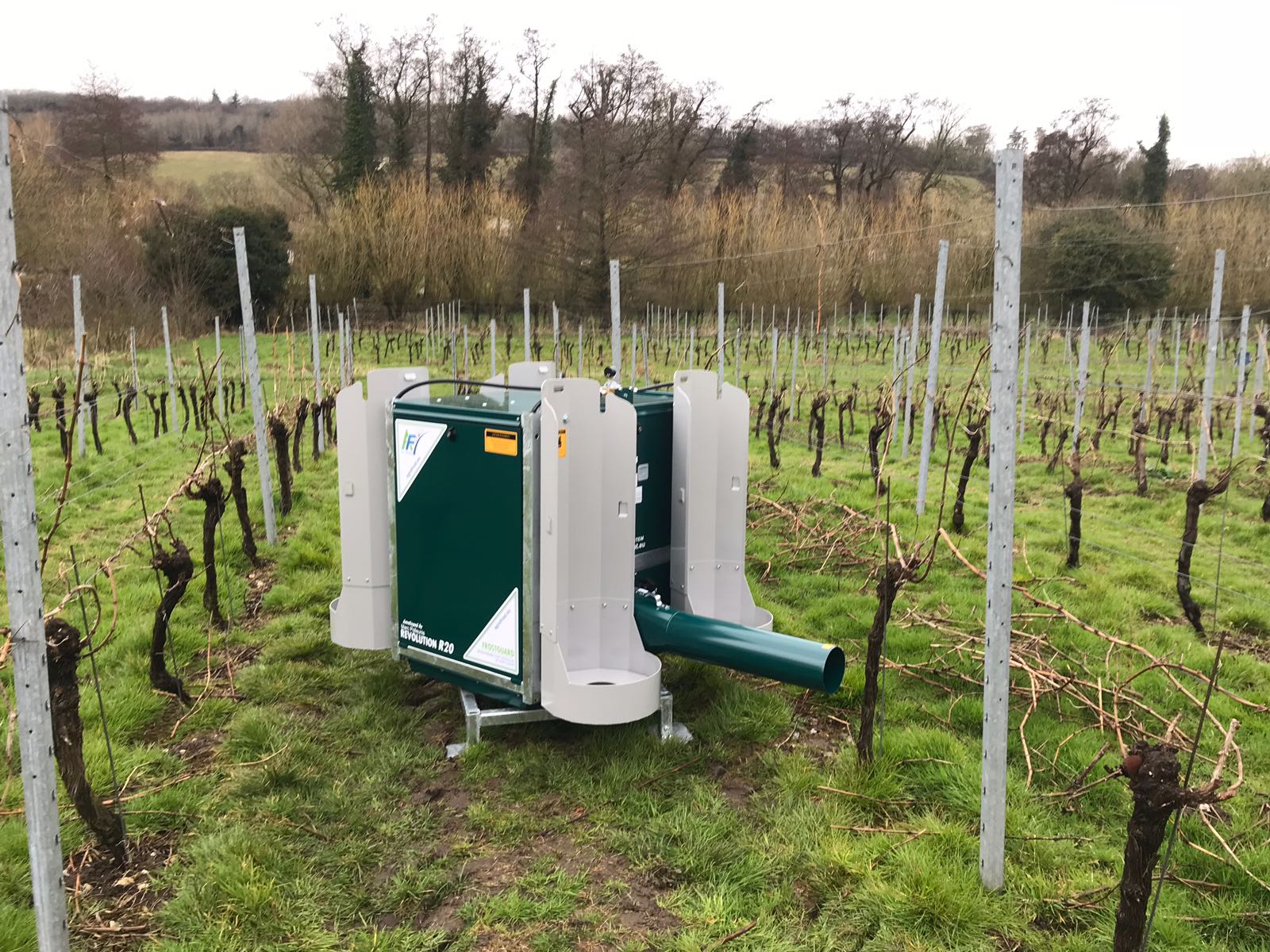 Smaller crops do not just mean fewer returns for growers; the economic impact goes far beyond the farm gate as it often means less for the pickers, the packhouses, the contract wineries, the packaging and labelling suppliers, and retailers too.

Last year vineyards across the UK experienced one of the worst frosts on record as temperatures dropped drastically during May, just when buds were at their most vulnerable.

One of the most effective ways of combatting frost is with a Frostbuster, which has been used by growers worldwide for many years and has won many awards for the way it has revolutionised top and soft fruit and vine frost protection.

It has been proven to increase the temperature in the orchard, tunnel or vineyard, preventing the awful effects frost can have on the fruit bud. The machine works by burning gas to provide a heated air supply, which is then blown by a fan driven by the tractor across the orchard or into the end of a tunnel. By driving around the orchard, or vineyard, following a pre-determined route it is possible to protect an area of up to 8 hectares.

The Frostbuster allows growers to protect crops at sites where no water is available. It can be used not only during radiation frost but also during wind frost. Studies have been done to show that this machine can be used to improve fruit setting and it can also be used for drying fruit after rain to prevent splitting.

The Frostguard, a smaller, stationary version of the Frostbuster, was especially developed to be used in greenhouses, plastic tunnels and small vineyards and orchards. The petrol engine powered fan has an outlet to turn it around 360° continuously, which depending on the application, means it can protect an area of between 0.5 to 1.5 hectares.

If you’re going to invest in any form of frost protection, you need to make sure that it comes on at the right time. We have been working with Pessel for a number of years and have found their internet-based weather systems to be the most effective and reliable.

Unlike other frost protection systems, the working principle is not based on raising the temperature above the critical values but on phase transition and by controlling the forming of hoarfrost which is the biggest enemy for flowers and buds. Without protection, the layer of hoarfrost will increase and finally cause damage to the plant by dehydration as the ice crystals extract energy and humidity from the buds and flowers.

The Frostbuster and Frostguards from Agrofrost form a hot air stream every seven to 10 minutes, so part of the ice evaporates while the remaining ice gets energy from the passing air. The higher the humidity, the more energy that is transferred. This allows growers to protect crops with only a fraction of the energy input that is needed by other systems.

iMetos ice is a remote weather station which can be installed in your most frost vulnerable area. Every 5-minutes it reads the temperature from both its dry and a wet bulb temperature sensor and every hour it records this accurate information and growers can set this to upload to the iMetos client database via its inbuilt cellular phone. All you need is a GPRS sim card and account.

All data collected can be reviewed online, and there is also a password protected site where you can set alarms for when it detects certain temperature levels. Within minutes of the alarm value being reached the telephone numbers that you set will be automatically rung.

A major advantage of these weather stations is that they require very little energy and can be run for a long time on the integrated rechargeable storage battery, which is constantly recharged by solar cells. Even in periods of bad weather and in regions with little sunlight, the energy is sufficient to operate the device throughout the year without interruption.

Soil moisture content, soil temperature and rainfall can also be added to the system to make this a universal recording station.

If you want to chat through the full specifications or want to know more about the Frostbuster, Frostguard or iMetos ice, please do give me a call on 01580 712200.

Having worked at Hall Hunter for 27 years, Carl Eatwell has seen the family farming business evolve from a vegetable and root crop grower, with a small strawberry PYO, into a commercial multi-site operation, which exclusively grows soft fruit for the UK’s major supermarkets.

“While we focus on strawberries and blueberries, we do also grow raspberries and blackberries,” said Carl, who is based at Heathlands Farm. “Over the years, our growing methods have changed drastically. Around 17 years ago we moved from having the plants in the ground to table-top systems. Then, in the last five years we have adapted again and today all our strawberries are on a six line system which is much easier for harvesting and also gives us a much better class of fruit from the crop.”

Like many growers striving to be more accurate with spray coverage, when Carl started looking for a suitable system which would effectively target the underside of the leaf, he approached specialist fruit machinery dealership, NP Seymour.

“When buying a sprayer off the shelf, you are very limited, so we have been working very closely with Nick and his team for nearly two decades to get the best application methods for our crops,” said Carl. “Our first sprayers from NP Seymour were from Berthoud, but Nick customised the equipment to fit our needs with new arms and a different nozzle system. Then, around 10 years ago, NP Seymour designed and made our first custom sprayer to fit our eight line system and finally as we moved to the latest six line system, they helped us to redevelop our sprayers again.”

The bespoke table-top strawberry sprayers from NP Seymour are all air assisted, providing growers with the ability to spray the crops with more accuracy, better coverage and efficacy.

“All of our sprayers come with a sophisticated computer system which will constantly show the calibration and we are able to calculate, even within a few metres, where our spray products will run out. With this, our costs have been reduced greatly because there is no need to over mix products and there is no wastage,” said Carl. “Our sprayers also have in built wash tanks, which saves us a lot of time and there are also induction hoppers fitted so we can mix the products more safely and you are less likely to get blockages in the system when using certain products.”

As well as having its sprayers refurbished, with new arms and a new nozzle design, which the team at NP Seymour created, Hall Hunter also had a new custom-built sprayer delivered recently and those who follow NP Seymour on social media will also have seen that some of the table-top sprayers have been shipped to customers as far away as Sweden.

In January 2021 we delivered a Fruit-tec ‘Edward’ mechanical pruning saw to the team at Boxford (Suffolk) Farms.

The Fruit-tec mechanical pruning saw, which has been specifically designed for use in orchards, fits onto the same frame as the REDpulse Duo, as well as Fruit-tec’s popular Darwin mechanical blossom thinner.

In addition to its unobstructed forward view, the mechanical pruner also benefits from an automatic pivoting feature which prevents the horizontal cutting bar from hitting posts, or hail protection nets. The double blade system and carefully designed blades also ensure the high cutting quality needed to prevent diseases and parasites, such as aphids.

Is your sprayer really suited to your site?

The wet start to the 2020 growing season has left many farmers and growers battling challenging ground conditions.

Based at Rumwood Green Farm in Langley, Kent, Charltons is a fourth-generation family fruit business growing apples, strawberries and cherries on approximately 445 hectares, across 11 sites, all located within a 5-mile radius.

This year, the relentless rain meant that Charltons particularly struggled with one of its steepest sloping sites; finding it impossible to drive their trailed sprayer on the persistently wet ground.

Following a conversation with Nick, we were able to deliver a mounted OCLL CarraroSpray APUS5 within a matter of days – helping them to get back on track with their early season spray programme.

This air blast sprayer, which has a small tower for spraying horizontally or vertically, is specifically designed for use in compact spaces and on sloping ground where there is minimal room for manoeuvre.

Particularly in Kent, we find that a lot of our fruit customers have orchards planted on sites with steep gradients and heavy soils. Having a mounted sprayer alongside a trailed option is the only way to guarantee that sprayer-operators can get out in the spring, when the orchard floor is exceptionally slippery and problematic.

As machinery technology changes year-on-year, you may be surprised at how many sprayer options are now available. Orchards too are forever evolving and so, even if you haven’t experienced any ground related issues this season, it is always worth assessing whether your sprayer is best suited to your orchard system.

Opening up the canopy

Unlike other defoliators which use what’s known as an air blast system, the ERO leaf stripper, which Sam uses for his vineyard management contract work, has two rotating rollers and a fan which effectively plucks leaves from the vines.

While air blast systems are limited for use between flowering and berry formation, and then right before harvest, the ERO’s ‘suck and pluck’ can be used at any time from flowering right through to harvest.

We’ve found that this gives vineyard managers a bit more freedom and flexibility when it comes to planning leaf stripping into the schedule. Also, by taking away the jets of air, leaves and debris are not blown into the canopy, which avoids any risk of disease.

On average it costs £350 per acre for a team of labourers to leaf strip one side of the vines by hand. In comparison, the ERO can be configured in a single- or double-sided set up, which is then capable of doing 0.5ha or 1ha per hour respectively. The single-sided option can also rotate so that it is possible to just defoliate the east-facing side of the vines. Just looking at the figures alone it’s not difficult to see why they’re becoming increasingly popular.

If you want to chat through the various options and what would be most suitable for your site, please do just give me a call on 01580 712200.